Littering and excessive incense-burning by Pchum Ben visitors are giving some monks a headache.

On the 13th day of the annual 15-day Buddhist festival on Thursday, monks around Phnom Penh told reporters that trash was piling up and smoke was getting everywhere from the crowds of worshippers passing through their pagodas.

Yem Sok, a monk at Phneat Simpily pagoda, said monks’ houses were turning into “ovens” from the overly large bundles of incense being burned by visitors.

“It gives us headaches,” Sok said.

Visitors also did not seem to be able to uphold basic hygiene, he added.

“They eat food along the tables or under the trees, and then scatter the trash. That makes some Buddhists angry with the monks” because visitors think the monks are failing to keep the pagoda clean, Sok said.

A monk at Wat Samakki Raingsey, Pha Sophun, said people should be burning only a little bit of incense at a time.

“Burning a lot of incense at once has many risks, and incense can cause many negative impacts from the toxins in the smoke,” Sophun said.

San Brovin, a monk at Por Thik Nhean pagoda, said he frequently advised Buddhist visitors to be more mindful with their trash.

But they would turn against him, telling him it was wrong for a Buddhist to accuse others, Brovin said.

“About the trash issue, [I’ve] told Buddhists many times, but they don’t listen. And in the early morning, the trash piles up just the same,” he said.

Khun Vanda, a frequent pagoda visitor who is also a reporter at VOD, insisted that she was not one of those Buddhists who cause the monks trouble.

She only burns one stick of incense at a time, saying that prayer and having a mind full of proper thoughts were what mattered to the gods, not big bundles of incense.

She also said that according to her observations, it was Cambodians intermarried with foreigners who exhibited worse behavior such as burning many sticks of incense.

“It’s not good to burn three sticks of incense per person, because many people attend the pagodas. How many boxes could a pagoda have?” she asked.

Vanda also said that she makes sure to take care of her own trash.

It was largely the plastic wrapping of gifts given to monks that was being left scattered around pagoda grounds, she added.

“I have seen that usually when plastic-wrapped products are brought to the monks, they take only the product and the plastic remains on the ground,” Vanda said.

Chi Tean, a 55-year-old clothing vendor, admitted that she likes to burn several sticks of incense at one time when she visits the pagoda.

She typically burned five sticks at once, as a prayer for her mother, father and seven generations of ancestors.

“I know that nowadays we are not supposed to burn many sticks of incense inside pagoda buildings, but this is my habit and I like it,” Tean said, noting that some pagodas had begun to move their incense bowls outside. “Incense isn’t supposed to be burned indoors at pagodas because it can have an effect on people, but our religion does it like that, and I still like it.”

“It doesn’t make a problem,” she added. “In pagoda buildings, [they] burn for only a short time, then they are put into water.” 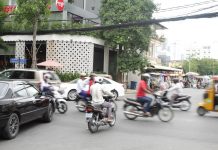