Phnom Penh’s 10 million plastic bags used and thrown out each day will “remain microplastic forever,” circulating through the country’s food, water and air, an environmental campaigner has warned.

“It will still remain microplastic forever (the tiny particles that end up in our food, water, and air),” she said in a message.

Microplastics can block the digestive tracks of small animals, and are thought to have an effect on hormones, cancer and DNA mutation, a researcher recently told The Washington Post.

“Sadly, plastic is today quite cheap in Cambodia, so shopkeepers can provide one plastic bag per item without asking if people really need it or not,” Orinel said. “If it was a bit more expensive, or if customers had to pay to get a bag, shopkeepers wouldn’t give a plastic bag away so easily. It has become a bad habit in Cambodia to put everything in a plastic bag even if it’s useless.”

The key was reducing the use of plastic bags, she said. “And for the remaining: put it in a garbage bin and let the waste collection company take care of it by disposing it in a landfill.”

She also encouraged shoppers to carry their own reusable bags. “People don’t realize how many plastic bags they are using every day and every week,” she said.

According to Environment Ministry spokesman Neth Pheaktra, Cambodia produces about 4 million tons of garbage a year, of which 15 to 20 percent is plastic waste. Phnom Penh uses about 10 million plastic bags a day, he said.

The ministry is rolling out a pilot campaign for people to separate kitchen scraps, plastic and hazardous waste, he added.

“It is time we get back to nature, reduce plastic waste,” he said. “If you inspect the human body, we have microplastics inside.”

However, Cher Lymouy, a housewife in Pur Senchey district, said it was hard to stop using plastic bags when they were so cheap and convenient.

“For only two or three thousand riel I can get a pack with many bags,” she said. Nevertheless, she acknowledged that the number of bags used in packing just one meal seemed excessive.

“Some people need four or five plastic bags for one meal,” she said.

Phal Sophat, a Facebook user promoting a “Garbage Family Campaign” online, said it was up to families and communities to start taking responsibility for the environment.

“Garbage comes from people. If we want to get rid of garbage in public places, education should start with our own families first, to let them know the bad impact of trash, and be a good model,” he said. “The first step is to start from our own families and continue to the whole community.” 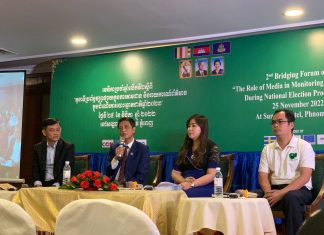