Cambodia’s emerging political class is showing renewed interest in the political legacy of King Norodom Sihanouk, with some young leaders saying the anniversary of the King Father’s passing is an apt time to reexamine his policy of neutrality amid Big Power rivalries.

Norodom Sihanouk, who died in Beijing on October 15, 2012, is often lionized for ending French colonialism in 1953 and forging national unity in the aftermath of decades of war. For older Cambodians, he is remembered for leading the Sangkum Reastr Niyum and for navigating the treacherous Cold War rivalries between the United States and the former Soviet Union.

But for many young Cambodians, keenly aware of escalating tensions between the United States and an increasingly assertive China, the former King Father’s policy of neutrality may offer not only a history lesson, but a road map for national security.

“Political neutrality during the Sangkum Reastr Niyum played out in a competition of political  ideologies — but now such neutrality persists in the context of economic competition,” said Yang Saing Koma, a co-founder of the Grassroots Democratic Party. “Cambodia should maintain its independence by not relying on any particular superpower, but for the sake of the country’s economic and commercial success.”

Pich Sros, president of the Cambodian Youth Party, argues that security lies in firm independence. “Cambodia’s stance must not subordinate to any state while a great competition between major powers is escalating,” he said.

A survey of the country’s history, and the region’s, may offer a cautionary tale.

“There is only neutrality if we commit to balanced diplomatic relations with all foreign states,” said Sambo Manara, a history professor at Pannasastra University. “During King Sihanouk’s era, there was an ideological competition between communism and liberalism. Cambodia, as a small state, had to adhere to political neutrality to ensure stability and peace.”

For a while, at least, independence insulated Cambodia from the deadly political schisms that fractured her eastern neighbor.

“After gaining independence, and due to Geneva Conference in 1954, Cambodia was able to prevent national division, like during the same period when Vietnam divided into North and South,” Sambo Manara said.

Five decades later, the country persists in its assertions of neutrality.

“The Royal Government is committed to playing its role in complying with the constitution under independence, permanence, neutrality, non-aligned state, and the prohibition of the presence of any foreign military base in Cambodian territory,” said Sok Eysan, spokesperson for the Cambodian People’s Party.

Not everyone agrees. Meach Sovannara, a former official of the government-dissolved Cambodia National Rescue Party, said that the recent signing of a free trade agreement with China, in addition to the European Union’s withdrawal of its Everything But Arms trade agreement, serves as evidence that the current government is anything but impartial.

“After the dissolution of the main opposition party, we see that China’s influence in Cambodia has increased dramatically,” he said. 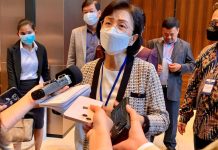